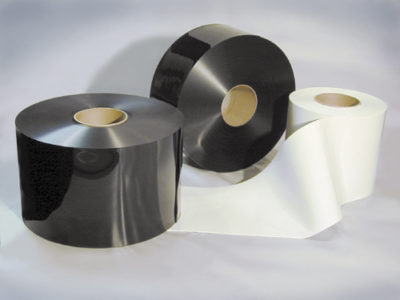 Tinted and translucent PVC from Chase TMI is intended to provide increased layers of privacy while allowing light to pass through. Tinted material is often used for reasons such as aesthetics and comfort. Tinted PVC has the same environmental control benefits of clear PVC but provides a unique look for the strip door.

The blue strips can be used for light-duty traffic and within temperatures ranging from 0°F to 150°F. Ocean Blue PVC strip and sheets are effective at reducing the infiltration of light and also provide greater amounts of privacy than clear strip doors.

When privacy is an issue, TMI offers flat, black standard strips that can be used to create a non-transparent, completely private barrier. Black PVC strips are commonly used in secure areas such as conveyor belts, airports, and other rooms where privacy is a primary concern. Black PVC restricts viewing but enables people and objects to pass through freely. Black PVC is 100% opaque and can be used in settings where the temperature is between 0°F to 150°F. The black PVC strips are also effective at blocking light to control brightness within rooms.

White opaque PVC strips are used to provide environmental separation while also restricting visibility to create added levels of privacy. White opaque strips can be used on conveyors, in dairy applications or other setups requiring a clean, basic look. The material will remain effective in temperatures between 0°F to 150°F.

A useful and effective safety tool, orange safety tinted PVC from TMI can be added to the outermost sides of clear PVC strip doors to show forklift operators where the wall is located. These strips help to maximize workflow as the bright orange color makes them easily identifiable.

Orange Safety PVC is available in both flat and ribbed. The raised ribs ensure that forklifts impact the ribs first, keeping the rest of the strip clean, clear, and intact. All orange strips can be used in warehouses and other areas where temperatures between 0°F to 150°F.

Disclaimer: Due to the variety in computer monitors, and lot to lot raw material variations these colors may not show an exact representation. Actual samples should always be requested if color accuracy or matching is key to your decision.